History of Tang Soo Do

This Korean art has its origins in the martial traditions of the Korean peninsula during the Kokuryo Dynasty (AD 37-668). It was during the Silla Dynasty (AD 668-935) however that an elite caste of highly skilled warriors emerged. From the south-eastern kingdom, these warriors soon conquered the neighbouring kingdom of Baekje. The conquerors were known as Hwarang which means “the flower of youth”. These warriors were skilled equestrians, archers and swordsmen. They also showed great skill in unarmed combat. The close proximity of Korea to China lead to the constant influx of Chinese combat techniques, which were adopted by the Koreans in a characteristic way.

It was during the Kokuryo Dynasty (AD 935-1392) that a systematic development of the various aspects of Korean Military art occurred. The new martial system was called soo bakh do, and was taught to the military. The new art incorporated weapons, such as the sword, spear, bow and knife as well as unarmed close-quarters combat and grappling. Regular tournaments were held and the victors were promoted to positions of military importance. The art was extended and refined during the Yi Dynasty (AD 1392-1907).

The Japanese invasion of Korea in 1907, brought an end to the ruling Korean Dynasty, and along with it, the warrior caste. From 1907 until the end of WW II in 1945, the practise of Korean martial art was discouraged as the invaders brought the Japanese arts of judo, kendo, aikido and karate to Korea. Shortly after the war, five martial art schools emerged in the newly liberated Korea : Moo Duk Kwan, Changmu Kwan, Sangmu Kwan, Jido Kwan and Chungu Kwan, each practising a unique Korean blend of Chinese (Kung fu), Japanese (Karate) and native Korean (soo bakh) arts. The Moo Duk Kwan school was run by Grandmaster Hwang Kee, who had also travelled to China. While in China, he complemented his mastery of original soo bakh do by studying the Chinese martial arts (kung fu, wushu etc).

In 1964 the Korean government planned to unite all Korean styles under the name Tae Soo Do, but this failed. A year later (this time, successfully) the government united many Korean arts under the name Taekwondo. The move was not universally well received, and Grandmaster Kee along with the grandmasters of many other styles broke away. He renamed his school Moo Duk Kwan Tang Soo Do. which means “the way of the (Chinese) open hand”,

In 1957 Grandmaster Jae Joon Kim, student of, and successor to Grandmaster Hwang Kee, began teaching Tang Soo Do to American G.I.’s stationed in Korea. In 1968, former student and Karate pioneer in America, Dale Droilliard convinced Grandmaster Kim to come to America, which he did in 1969. He then set up the World Moo Duk Kwan Tang Soo Do Federation, which currently has associations in 36 countries world-wide, including South Africa. 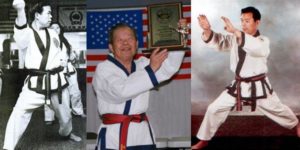 In 1996 a new federation was formed, with the aim of combining the modern thoughts with traditional training. The Federation has as its core the traditional syllabus of World Moo Duk Kwan Tang Soo Do and has complimented this with additional weapons and the introduction of weapons forms designed to be practically applied in everyday situations to create a greater understanding of the weapon.

The Head of the Federation is Grand Master Eddie Jacobsen (RSA) who has the experience and knowledge to lead the students to a greater understanding of their techniques and forms. . The federations Honourary Grand Master was Grand Master Jae Joon Kim. 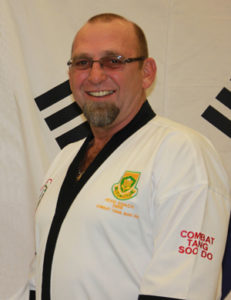 Grand Master Jacobsen began his training in martial arts at an early age with some boxing. He then trained in Shukokai and Goju Ryu Karate. He left Goju Ryu to train in the more traditional system of Ryu Kyu Kobujutsu wherin he reached a level of second dan. During this time he travelled extensively to train in Japan and China. In 1987 Master Jacobsen went to the U.S.A. to train under Grand Master Jae Joon Kim. Upon his return in 1988 he was appointed chief instructor for South Africa’s Moo Duk Kwan Tang Soo Do Federation. During subsequent visits to America he was graded to masters level by Grandmaster Kim and he currently holds an eighth dan.